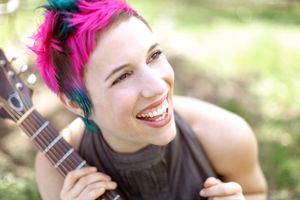 This week, I'm happy to welcome ritual leader and Jewish songwriter, Shira Kline, and we talk about her song "The Sun Shines Down On Every One" which she co-wrote with Lee "Free" Frisari and Avi Fox-Rosen.

Recognized as a “revolutionary educator” and named one of the “new re-engineers of Jewish life,” Shira Kline plays worldwide as a performance and ritual artist.  She specializes in creative musical worship with adults and children's spirituality.  Her work is in the garden of life: activating imagination, expression, and heart opening.  On Shira’s tours, she performs in communities of all ages throughout the United States and stages in Israel, England, Italy, Australia, New Zealand, and South Africa.  She also presents extensively across the denominational spectrum for clergy, educators and lay leaders, and is adjunct faculty for the HUC-JIR Debbie Friedman School for Sacred Music. Shira is a co-founder of Lab/Shul NYC, an artist driven, God-optional experimental community for sacred Jewish gathering where she is the Director of Worship. Her award winning ShirLaLa Jewish kiddie rock albums along with her parent and teacher resource center, “Blog Sameach,” are featured worldwide.