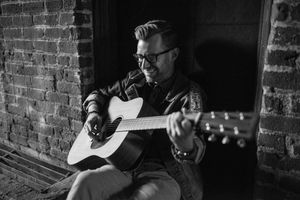 This week, my man Charlie Kramer from LA opens up about his blindness and how that has impacted his life as a Jewish songwriter.  Then we talk about the powerful message of hope behind his tune "Closer."

Listen to "Closer" and all of the featured songs that have appeared on Jewish songwriter by subscribing to the Jewish Songwriter Playlist on YouTube and Spotify.

Legally blind and armed with an acoustic guitar, Charlie Kramer unites, magnetizes and elevates the communities around him. A touring songleader, songwriter & spiritual leader. Charlie has sung with communities throughout North America, Israel, Australia and New Zealand.

Pioneering generous gear and instrument donations, Charlie worked to transform the camp library into “The Lab”, Camp Hess Kramer’s first ever fully designated music space. Enabling campers to explore their musicality in a fresh environment, the creation of “The Lab” culminated with CHK’s first inaugural Rock Band. Charlie established a thriving youth choir culture with 3 different age groups at Temple Israel of Hollywood (1st-3rd, 4th-6th and 7th-10th grades). This year, co-leading the Teen Chavurah at SLBC, Charlie is more present in the Jewish world of song than ever as he unlocks and activates the potential of each community he leads.

Released in September 2017, Charlie’s debut EP, We Will Overcome maps out personal and global struggles with comforting, spiritually-driven sing-along anthems. With the music of We Will Overcome, Charlie hosted a Gathering for Change- combining concert, social action projects & fundraising together to benefit change-based organizations & communities in need of healing. During one Gathering for Change, Charlie and Temple Israel of Long Beach raised over $1,000 for Hurricane relief in Puerto Rico!! All proceeds (Every Dime!) of We Will Overcome benefit Planned Parenthood and The Ricky Martin Foundation.