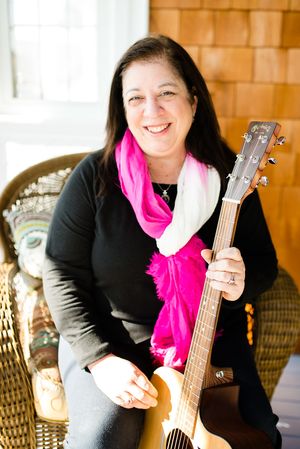 Originally from New Rochelle, NY Sue Horowitz grew up playing in NFTY and rock bands, but didn't write her first song until she was 40 years old after attending Hava Nashira.  But with her first release, recorded with Josh Nelson, she made it onto Ruach and the rest is history.  We talk about her journey and "Peace Song" from her latest release, "Notes from the Garrison."

Listen to "Peace Song" and all of the featured songs that have appeared on Jewish songwriter by subscribing to the Jewish Songwriter Playlist on YouTube and Spotify.

Sue Horowitz is  a Jewish singer-songwriter from the rocky coast of Maine and just recently, the fields of Iowa. Sue believes in the power of community singing and knows that music can be healing, uplifting and helps us connect to one another. Her tunes range from lyrical to bluesy, from meditative to joyous. Sue's CDs, Eleven Doors Open, In The Water, and The Power and the Blessing have been produced by talents such as Josh Nelson, Dan Nichols, and Grammy-nominated Nashville producers, and her music is used in worship in congregations throughout the US. Sue's latest folk CD, Notes from the Garrison, was recorded in Boston. She also has spearheaded a Hope and Healing music project that has raised over $16,000 for cancer causes. She has performed at numerous conferences, venues, homes, and congregations throughout North America and most recently was spotlighted at NERFA's DJ's Choice Concert, playing for fellow folk musicians, and music industry professionals. Publications include the URJ Ruach series, the CCAR's Hagaddah, Shalshelet, Chazak V'Ematz/Jewish Songs of Protest and Hope, WCN's Kol Isha, and Hebrew in Harmony, and she has been a finalist in the Just Plain Folks songwriting competition.  Sue has been involved in the Kesher Shir writing collaborative as well as yearly writer's workshops with Dar Williams and David Roth; She hosts and leads songwriting workshops including the Jewish Songwriting Collaborative Retreat, now in its second year. Consistently hearing rave reviews,  Sue's warm engaging presence and spiritual music captivate worshippers and audiences of all ages.